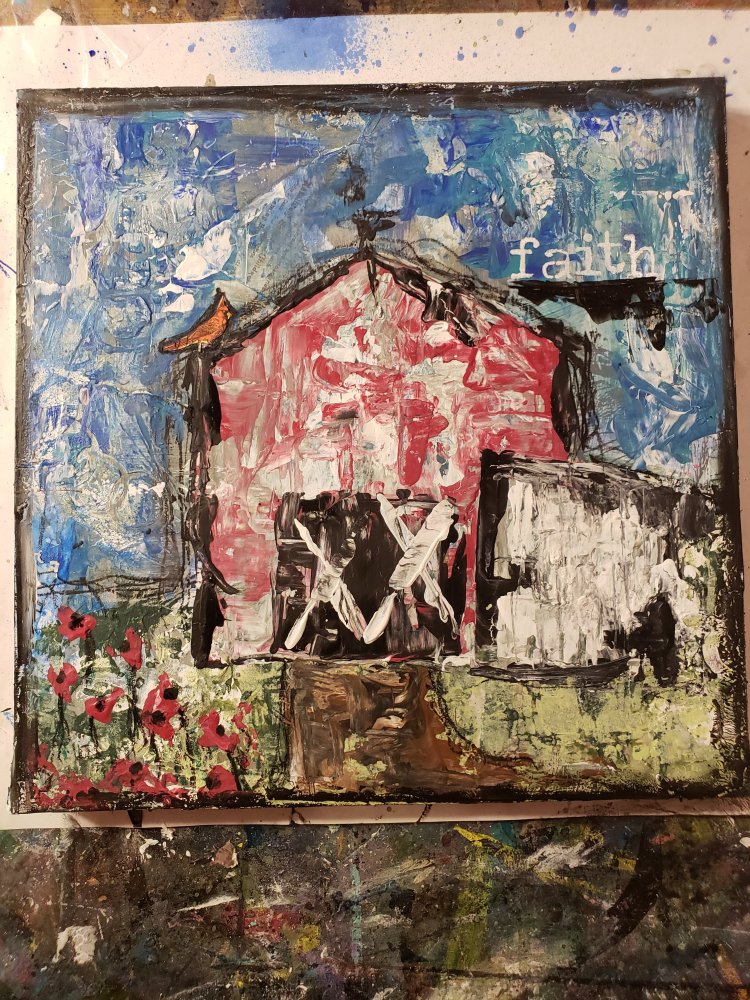 Faith is an interesting word. One that is defined so differently for people.

Faith often gets intertwined, for good reason, with religion. However, they are indeed separate. I grew up going to Catholic School…I had a strong faith and strong religion then. Now, my faith is just as strong, probably stronger, but I’ll let my Catholic Guilt tell you that I’m bad at getting to church, bad at remembering to not eat meat on Fridays in Lent…..you get the idea. My religion is not great at the moment. But my faith, well, that is bigger than those things.

Some see faith as God, some as the Self with the capital ‘S’, some don’t look at faith as tied to a being or state, but rather a belief in something you cannot see, a belief in the bigger picture.

In this piece I put a cardinal, a sign for many of loved ones who’ve passed giving a sign of more, a sign they are with us. But I also included my personal sign of faith, Poppies. Before my 2 children were born, I was pregnant with my first child. We lost that child, a child we called Poppy, after those points where you should be “in the clear”. And I will tell you, nothing has the ability to throw all of what you know upside down more than the loss of a child. While for some, this could be devastating to their faith, to their belief in something bigger, well, for me, it led to something much bigger, much deeper than obeying church rules ever could.

Within days, through the blurry fog of sadness, I received multiple ‘signs’ from our angel baby. Poppies started appearing in the strangest of places- a book that hadn’t mentioned poppies for 256 pages suddenly was talking of poppies, a poppy given to my mother by a friend who did not know of what had happened, a friend on Facebook sent friends a pic of a flower, chosen at random to brighten their day, again, she did not know of what happen, and you guessed it, she sent me a poppy. All of these things happened within 2 days.

I immediately knew. I knew things would be ok, I knew there was something greater, I knew there was more to this story of me being a mother & I needed to have faith, to trust in a bigger picture, to believe that my Poppy was meant to be a wonderful guardian for the kids I would have.

And she has not let me down. Poppies arrive when I most need a reminder of faith, when I need to remember that this moment was meant to be & will lead to something greater. Even if the world feels blurry, a Poppy is always clear to me, it refocuses my world.

I’m sure cardinals or dragonflies or whatever it might be do the same for many.

So, this piece. It’s meant to be a bit out of focus, all but the cardinal (and for me the poppies). That glimpse of proof for our faith in times where it’s hard to see.

Thanks for sticking in here for the story of this piece. I hope it touches your heart in some way.